Gomokunarabe commonly known as Gomoku is a strategic board game that is catching the attention of a large number of games. From its humble origins in the 19th century, Gomoku is the Japanese version of a popular board game called Wuiziqi. In fact, when this game was introduced to the Britan, it became a massive hit and is now known locally as Go Bang.

The rules of this game are simple. Players rotate chances by positioning their coloured(black or white) stone on a vacant intersection. The first play is reserved for black.

The objective of the game is to form a continuous chain of five similar coloured stones diagonally, horizontally or vertically, and the first player to do that is the winner. Don’t forget to stop at 5, if you form a line of more than 5 pieces, they are called overlines and are not counted.

When unbound, Gomoku has a significant advantage that helps the first player. The “Pro” opening rule, which required the first player to put the first stone in the middle of the board, was originally used in Gomoku championships. The stone placement of the second player was unlimited.

Considered to be too unbalanced the game adopted a new method that in which the first to play puts three stones, one white and two black on top of the board. Now, the second player can use one of his three options; to play as white, to play as black or to put another set of stones on the board and then let the first person choose the color.

These are some of the common types of the Gomoku.

Probably the most common type, freestyle Gomoku has no rules for either player and allows them to win by forming a line of five or more stones by alternating turns placing one stone at a
time.

The colour black has long been thought to provide a competitive edge. Renju tries to balance the game by adding more rules to lessen black’s first-player advantage. It’s played on a 15×15 board with three and three, four and four rules, and only Black gets
overlines.

Omok is similar to Freestyle Gomoku, except it is played on a 19×19 board and incorporates the
three and three rules.

Ninuki Renju, also known as Wu, is a variation that adds capturing to the game; the opponent can capture a pair of stones of the same shade using custodial capture (where two lines of stones are sandwiched along their length). The player who makes a perfect five in a succession or captures five pairs of the opponent’s stones is the winner.

It follows the same rules as Renju, with a 15×15 board, three and three rules, and overlines. It also permits the game to continue after a player has constructed a five-stone row if their opponent captures a pair of stones
along the line.

Pente is similar to Ninuki-Renju in that it uses the same custodial capture mechanism, but it is often played on a 19×19 board and does not employ the three and three, four and four, or overlines rules. 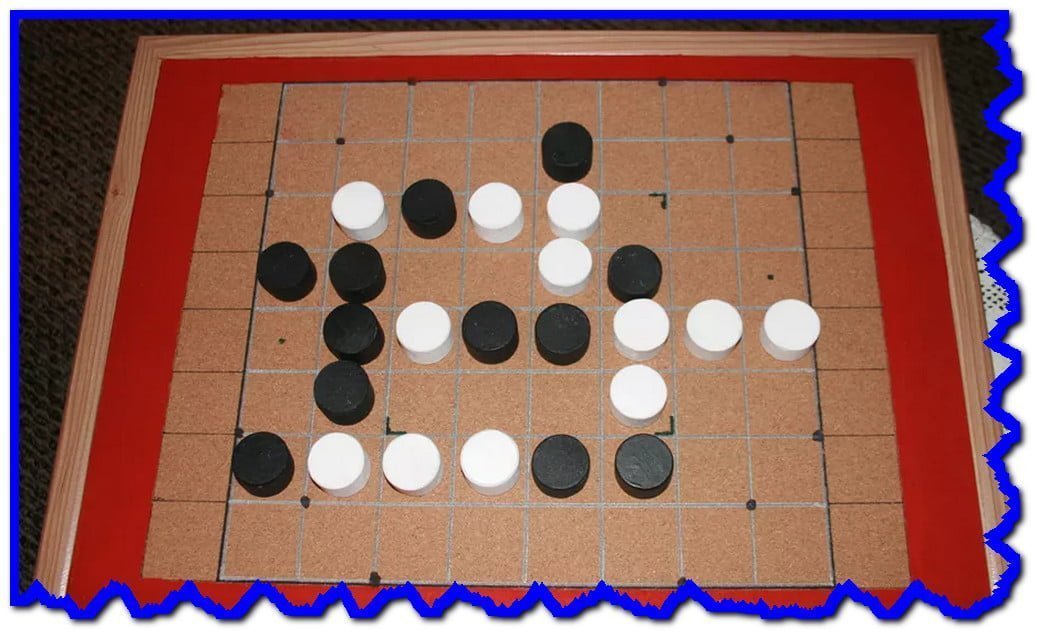 Play a black stone to begin the game. The person that uses the black stones usually starts the game by placing one of their pieces on the board. The stones are put on the crossings generated by the pattern of lines on the board (people
often confuse it as squares). During your turn in normal freestylingGomoku, you can lay your piece
on any crossing you like.

You can’t move a piece once it’s on the junction for the duration of the game. Scientists have mathematically demonstrated that this restriction significantly reduces the first person advantage. In real-life games, however, various skill ranges among players frequently result in diverse outcomes.

Players take turns in alternating play. The two players take turns during the game, each placing one of their stones on the board during their turn. The second player will play a white stone only after the first player has finished placing a black stone.

Duration of a turn is generally measured using chess clocks during Gomoku competitions. Players usually get a total of 10 minutes per game.

To win the game, try to get 5 pieces in a row. To win, you must be the first player to line up 5 of your stones in a straight line. Any direction is possible for the line: horizontally, vertically, or diagonally. While the rules of Gomoku vary, the traditional version stipulates that winning lines must consist of exactly 5 stones and no more. Overlines are rows of 6 or more pieces that do not count.

How To Get Best Minecraft Servers For Bedrock